On 21st September 2020 the Undersecretary of the Ministry of Labor and Social Development, H.E Mohamed Elshabik, the newly appointed Commissioner General of Jabel Awlia Locality Ehad Asheem Ismail, the Italian Ambassador, H.E Gianluigi Vassallo, and the Head of the Italian Agency for Development Cooperation (AICS) in Khartoum, Vincenzo Racalbuto, paid a visit to Mayo, where Italy is implementing  several project aimed at easing the difficulties of the local population.

The Italian cooperation is active in all the four areas in Mayo through different interventions with an overall amount of 4,850 million euros. In Mayo Angola, Maymouna School - hosting more than 350 students - has been completely rehabilitated with the support of Hope Sudan, a local NGO; four channels and three crossing bridges have been realized and rehabilitated with the participation of Jabel Awlia Locality and the participation of the local community. The interventions are following the assessment made by the Italian Civil Protection – CIMA research Foundation – last march aimed at assessing ponding-prone areas in Mayo and defining possible surface water disposal solutions.

“The Italian Cooperation is deeply engaged in Mayo area and we will continue to support the most vulnerable people. In this framework we are working through a DRR (Disaster Risk Reduction) approach: 1.800 jute soil sacks and 225 plastic covers have been distributed to the local population in the areas of Yarmouk, Gabboush, Angola and Mandella; channels will be completed within next week, and we are about to start the construction of a new school in Mayo Mandella using local material and a bottom up approach,” underlined Racalbuto, Head of Office at AICS Khartoum.

Alongside the visit to the channel and Maymouna School, the delegation visited the pediatric clinic run by the Italian Ngo Emergency and funded, among other donors, by Italy. The clinic offers fully free of charge pediatric care for children up to age 14, an antenatal/postnatal care and screening programme for malnutrition and basic hygiene rules. In Yarmouk area, within an Italy-funded emergency programme, the Italian Ngo AISPO has installed a tank to collect and store rain water runoff, typically coming from rooftops via pipes.

The Undersecretary of Labor and Social Development echoed thanks to Italy and the local communities for their commitment for Mayo, and highlighted that it is our joint duty to ensure and promote sustainable wellbeing for the most vulnerable population. 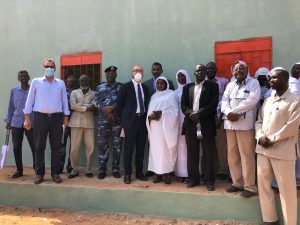 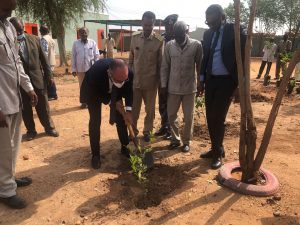 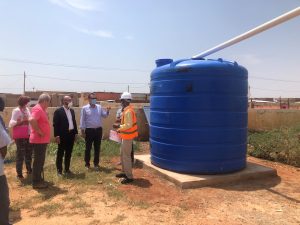 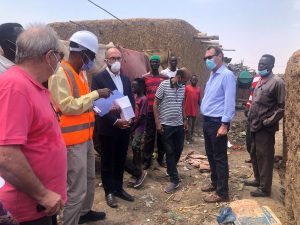