Eritrea belongs to the lower-income countries with an estimated GDP of $ 6.1 bln (USD) in 2017. The value HDI positions the country in 167th place. Political stability is determined by a regime that firmly maintains control of the country. The economy is mainly characterized by an agricultural subsistence sector and driven by the mining sector, the country is in fact rich in mineral resources (above all gold). In addition, revenues from remittances guarantee the subsistence of a large part of the population, and are important for Eritrea. The economic policies launched in 2016 have implemented economic-currency restrictions, further limiting the already difficult economic growth. Arid climate conditions and persistent droughts exacerbate the country's vulnerability to food insecurity. In 2012, UNDP estimated that 50% of Eritrean children suffered from malnutrition. The already precarious situation of Eritrea is joined by the large areas of fertile land that are unusable due to unexploded landmines, the lack of foreign currency, sanctions imposed by the international community and the very high rate of youth unemployment.

Due to its geographical location, the country is crossed by East African migration flows directed to North Africa and finally to Europe. According to statistics from the UN Refugee Agency, UNHCR, Eritreans are among the most numerous migrants reaching the Italian coast. At the end of 2016, 21,253 migrants escaped from Eritrea landing on the southern Italian coast, transiting for the most part through Libya (Report of the Special Rapporteur on the situation of Human Rights in Eritrea, Sheila B. Keetharuth - Human Rights Council - Thirty- fifth session - 6-23 June 2017).

Italy is engaged in Eritrea with the gradual re-launch of the Italian Cooperation, which could happen compatibly with the disposition of the Eritrean Government, on the basis of available financial resources and instruments. Taking into account the country's situation and the numerous needs, the possible initial areas of intervention have been identified in the sectors of health, nutrition, food security, water, development rural, renewable energy and not least the training and creation of employment and income generating activities.

The AICS initiatives are in line with the joint five-year Strategic Plan for humanitarian interventions in Eritrea 'Strategic Partnership Cooperation Framework' (SPCF) 2017-2021. The sectors most engaged in by the donor community are first emergency response (food security and support for displaced persons, refugees, migrants and host communities), support of rural development, strengthening food security, supply and access to basic services such as health, water and education. Italy fits in this context with a strategy aimed at supporting the ongoing multilateral initiatives on health and social support for children, as well as enhancing the activities of Italian NGOs, able to guarantee effective actions. Within the limit of available resources and possible agreements with Eritrean counterparts, activities under direct management will be implemented. 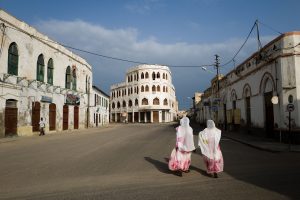