The project entitled "Protection of children and women in the Far North of Cameroon", funded by the Italian Agency for Development Cooperation and implemented by INTERSOS, aims to improve the living conditions of displaced people in the regions of the Far North of Cameroon through prevention and response activities to gender-based violence - GBV and child abuse. The intervention sites are 9 villages in the three departments of Logone et Chari, Mayo Sava and Mayo Tsanaga.

The risks caused by mines and other unexploded ordnance that remain on the ground after the conflicts, such as those at the origin of the humanitarian crisis in the Far North of Cameroon, are very high, especially for children, who are the most frequent victims of this type of accident because of their curiosity, which pushes them to explore spaces that do not know and touch unusual objects.

The training of the trainers was carried out in 3 days, one for each of the 3 departments: on September 25 in Mayo Tsanaga, on September 26 in Mayo Sava and on October 7 in Logone et Chari, involving not only psychologists, caseworkers and social workers of the project (32 people), but also community animators (45), for a total of 77 people.

In the villages the awareness campaign was developed through 9 events, involving, during the month of October, all the locations of the project, not only the 5 originally planned: the incidents that continue to be reported in the region show the importance of providing information and developing capacities in local communities on this issue by expanding the number of people sensitized.

The trainings in the villages targeted the health personnel, teachers, protection committees, heads of the host families (2 for each family), community leaders, for a total of 224 people. The participants were very motivated to disseminate the contents of the training, thanks also to the role played by each of them in their respective communities. In Kerawa, for example, the slogan for the next campaign has been chosen: inform to save lives. In Dabanga (Logone et Chari), where serious incidents have recently occurred (such as the explosion in a family of a device carried home by a child), awareness-raising sessions were held for children of the schools.

In support of the awareness phase, information materials were produced: 20 illustrated manuals (boites à images) and 9 banners (1 for each village) containing one of the key messages of prevention: the invitation not to touch unknown objects or those found in unusual locations.

The materials produced will remain in the "Spaces Friends of Children" to support the organization of awareness-raising activities by community leaders in the future. 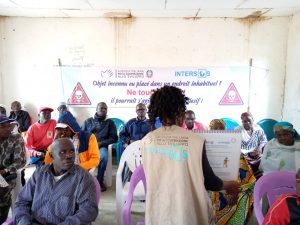 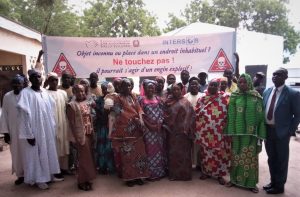 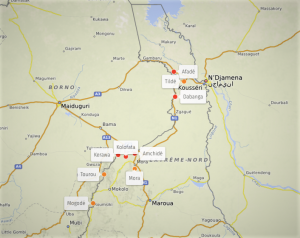