Following the heavy rains that hit Sudan - causing the death of 36 people, the destruction of 21,500 homes and 68 schools - the area of ​​Mayo, one of the poorest areas on the outskirts of Khartoum with a population of about 300,000 displaced, suffered serious damage: the streets were completely flooded, in some places the level has reached 1,5 meters; most of the mud houses literally "melted" leaving communities without any shelter.

In order to cope with the humanitarian situation, AICS Khartoum proceeded - as quickly as possible - with the distribution of food items such as sugar, flour, lentils, oil, and powdered milk to the community of Jabal Awlia where more than 1,500 families and about 4,500 children live. In this area, Italy supports the Hospital managed by the NGO Emergency, very active for the poores members of society thanks to free treatment and the contribution to the fight against malnutrition; Italy further supports UNDP for the construction of a women's primary school and capacity building aimed at the promotion of issues related to WASH and social inclusion.

The intervention was carried out as part of the Humanitarian Aid program AID 11002 aimed at improving the poor living conditions of the population of the Eastern States, North Darfur and Khartoum, in particular refugees and migrants 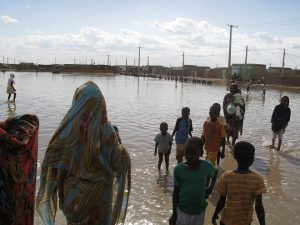 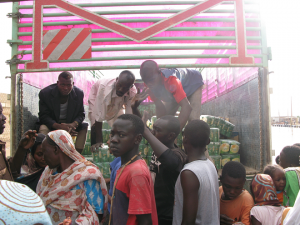