Italy reconfirms its leading role in the fight against malnutrition in Sudan. The Italian Embassy - together with the Italian Agency for Cooperation and Development in Khartoum – in its role of “donors convener” hosted at the Ambassador’s Residence a meeting to coordinate the international donors of the "SUN-Scaling Up Nutrition" movement. The network was born to cope with the primary causes of malnutrition through the joint activity of civil society, UN agencies, Donor Countries, private and academic sector.

Inclusiveness and coordination: these are the key words of the meeting attended by almost 50 guests, including diplomatic chief of mission and representatives of international organizations in Sudan.

The emergency of malnutrition in the African country is a cross-cutting phenomenon and, as such, it requires a multi-sectorial and multi-level response. The most urgent issue, in this sector more than the others, is to recognize a link between humanitarian aid and sustainable development and working on that, this needs to shed lights on the complementarity of the two interventions. Indeed, the action of coordination and the collaborative policies which Italy is promoting are strongly recommended, also in virtue of the worrying data recorded in Sudan during recent months. According to WFP data, almost 38% of children under the age of five suffers from malnutrition or poor nutrition. Still, there’s a growing percentages of vulnerable population to be added, due to the economic crisis Sudan is currently facing.

The key of the future strategy reiterated by the Italian authorities in Khartoum is working on social and cultural prevention in order to tackle the root causes of the phenomenon, as well as the implementation of urgent interventions already planned.

The presence at the meeting of the Sudanese Minister of Health, Ahmed Abu Zeid greatly reinforced the meaning of the event. The Minister, in a heartfelt speech, declared not only the government's commitment to dealing with the phenomenon more effectively, but also its personal involvement in concentrating more resources for the eradication of this social plague, making the fight against malnutrition the main mission on his mandate.

As underlined by the Italian Ambassador to Khartoum, Fabrizio Lobasso "the commitment of Italian institutions in Sudan is global, in consideration of the transversal nature of the theme of malnutrition, tending to invade, nowadays, all the sectors of development cooperation and social life, undermining the evolutionary path and the development itself of communities on the territory ". 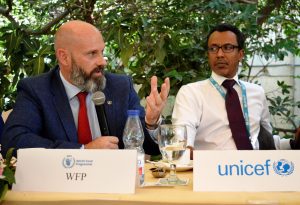 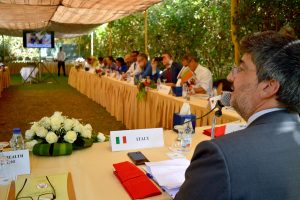 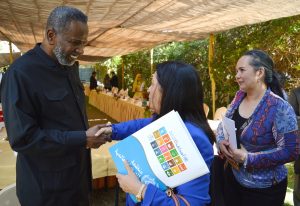